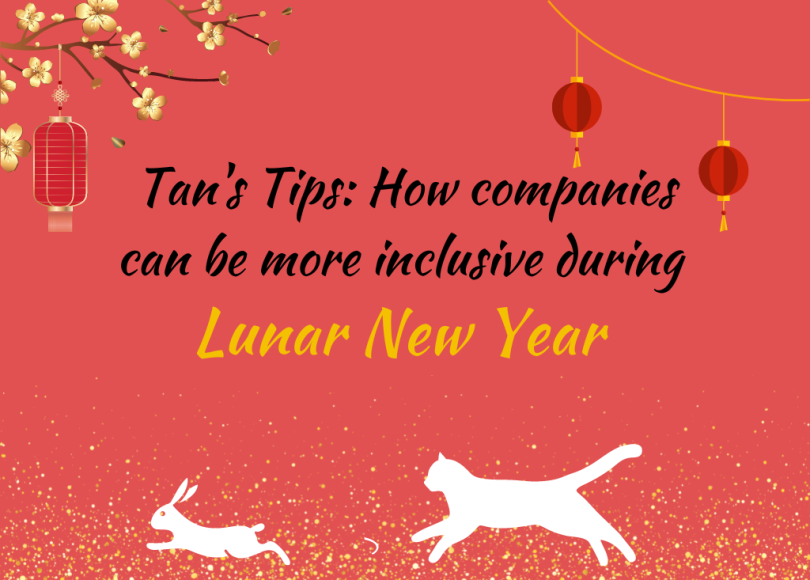 Being of Chinese descent, I admittedly use the term “Chinese New Year” quite a bit, predominantly when talking to other Chinese people and family. However, this is something that some companies are still doing and need to move away from. In a working world where Diversity and Inclusion have never been more important, the term Chinese New Year has become increasingly non-inclusive and biased. It’s also worth noting now though that if people wish to still call it Chinese New Year or similar due to their ethnicity they can and should – I’m not here to police people but help them and especially organisations understand why it should be adopted.

In this blog post, I will give some tips on how organisations can be more inclusive to reflect the modern world and this traditional festival, regardless of whether they have a diverse workforce or a diverse and far-reaching customer or client base or not.

1. Why Lunar New Year should be used instead

The “Chinese” New Year calendar is actually based on the lunisolar calendar (that indicates both the Moon phase and the time of the solar year), used in various cultures and the beginning of the New Year is always a new moon. But the reason Lunar New Year – or Spring Festival as it literally marks the start of spring on the aforementioned calendar – should be used more widely is because of course it is not just a staple in Chinese culture and not just celebrated by people of Chinese descent. Other ESEA (East and Southeast Asian) countries and people descended from them such as Korea, Vietnam, Indonesia and many others, all of which follow similar traditions and share similar beliefs, also celebrate Lunar New Year/Spring Festival. While it may not be necessary to educate yourself on all of these similarities and differences (though depending on your organisation’s ethnic makeup you may wish to), it is worth knowing or remembering that simple fact and reason.

In the UK – and indeed many countries – the Chinese population is undoubtedly the largest of the ESEA minority groups. Therefore, unconscious bias – and even conscious bias – will tell us that the Chinese are the ones to cater to. Even some Chinese may think that. But this is not the way forward or the way to think. There are an estimated 1.2 million ESEA people living in the UK, meaning roughly half of them or more are not of Chinese ethnicity and they mustn’t be forgotten, from when we teach young children about this right through to how we run a company.

2. How different cultures observe this time of the year

Even within the Chinese diaspora across the globe, Lunar New Year is celebrated in different ways, so understanding how so many different countries and cultures observe and celebrate it can be a mountainous task if you want to know. However, depending on your personal or professional connections both in and out work, simply asking those who you know do celebrate Lunar New Year is one of the easiest ways to absorb knowledge and learn more about your acquaintances, friends and colleagues. When the questions are worded properly (e.g. showing willingness to learn and enthusiasm, without being patronising or making assumptions and generalisations), many will likely be more than happy to share their traditions and their cultures.

When it comes back to the lunisolar calendar and the well-known zodiac animals, it is worth noting that even these can differ. For example, traditions surrounding the Lantern Festival (the 15th day of the first lunar month, which is a full moon and technically ends the two-week-long Lunar New Year festivities) vary from country to country. In addition, there are also some differences to the animals or even the timeline of the zodiac; the Vietnamese zodiac animal for this coming year is the Cat, not the Rabbit as many other cultures depict it to be, while the Burmese zodiac does not follow years like the others. So if you want to wish people a “Happy New Year of the Rabbit”, first think – who are you wishing it to?

Whether you’re sending out a quick group Slack message or a formal email across the entire business, posting a quick tweet on Twitter or launching a full Lunar New Year campaign, it cannot be stressed enough that your comms should be as inclusive as possible. This does not just mean by using the inclusive terms Lunar New Year and ESEA, but greetings such as “Wishing you a happy, healthy and prosperous Lunar New Year” (happiness, good health and good fortune are almost universally desired by those who celebrate) are simple yet effective. It should also go without saying that you should be mindful to avoid the use of garish and outdated fonts and images that can be seen as culturally ignorant or insensitive.

And if you want to relay comms or greetings in another language, you cannot give in to unconscious bias again; translate them into more than just Chinese, and any languages you do use, it is of upmost importance to get them translated properly – Google translate is not always right. Again, ask colleagues who speak the language to check or correct them first. If you’re only going to do it in Chinese when you have other ESEA employees, you may as well not bother at all.

While Lunar New Year should be a happy time for those who celebrate it, if anything has taught us about the last few years, it’s that bigotry and racism are more rife than ever. When companies and even public figures such as Boris Johnson, have extended Happy New Year wishes during this time, it has often resulted in a barrage of negative responses. Though I cannot speak for all ESEA people, I know for many this has affected their mental health as they deal with the hurtful words and sometimes even actions of people – both strangers and people they know or thought they knew – whilst navigating their way through a changing world in and out of work where they are not only a minority but feel unsupported.

Attacks against ESEA people across the world that have made headline news have also left many feeling vulnerable, fearful and unheard. So employers must be on the lookout for what could potentially upset their ESEA colleagues. If you see or hear negative posts or comments at work this should of course be dealt with seriously, but if you know about them outside of work you should extend support as well. ESEA people are less likely to confide in mental health problems than many other ethnic groups (despite “official” data saying they generally have better mental health than other minority groups) so you should try to recognise the signs or simply be more aware of your employees.

Other things to think about are whether ESEA colleagues need time off. This year, the first day of Lunar New Year is a Sunday so unless they work weekends, this may not be a problem. If Lunar New Year falls on a weekday, the Sunday after is usually the busiest day for them as public celebrations take place and they may visit their family if they can. Some may request the day off if it is a weekday, while others may request up to two weeks off if they are from overseas and wish to travel back to see family since Lunar New Year is the busiest time for travel to, from and in and around East and Southeast Asia.

In addition to it being extremely important to spend time with family during Lunar New Year, the same goes for those who may have suffered recent losses and are grieving. In some cultures, celebrating a happy time such as Lunar New Year so soon after the death of someone close to them, is considered disrespectful. However, families may still get together so they might require time off and personal greetings to them could need to be reconsidered if you know they have had a bereavement.

Similar to how you make your internal comms as inclusive as possible, your external marketing should follow the same guidelines. Three things to think about are: 1) Firstly, what is your goal with your marketing strategy? Are you just doing it to increase profits during Lunar New Year? If so, how can you show you still value people (both your ESEA employees and target audience) as much as you do your brand and revenue? 2) How diverse and inclusive are the marketing materials you produce and the people within the ads? 3) How diverse is the team behind the campaign and are they reflective of both the content and your audience? If not, why not and how will you bring others into helping to change that?

If you can find answers to those questions and work round them to: make sure your only goal isn’t to appease your audience to get their money, show you do care about your employees and other causes, diversify your marketing and make it more inclusive, as well as diversify your teams and include more people who can make decisions, then you’re on the right track to not only being a company with a conscience but also one with a commitment to make change.

So please, if you are truly wanting to recognise and utilise the importance of DEEIB (Diversity, Equity, Equality, Inclusion and Belonging), make Lunar New Year a time to show that, not just a time for generic greetings and a way to squeeze money out of people. You can read more about how to support ESEA colleagues during Lunar New Year, ESEA Heritage Month and indeed throughout the year on Culture Shift’s website here.

And if you are based in and around or near Greater Manchester and keen to learn more about the diversity of Lunar New Year among ESEA people and cultures and how to better include and support them, come along to this event, “LNY x MCR: The importance and power of ED&I during Lunar New Year” at the International Anthony Burgess Foundation on 25th January.